We were just notified by our paper supplier that our paper colors Turquoise and Orange Juice/Cherry Duplex have been permanently discontinued. Losing Turquoise is a pretty big disappointment to us, because we were previously told that there was plenty in stock. The bottom line is that both are discontinued, never to return again. Please remove them from your color ring. We apologize for any inconvenience. (Please note that we have enough Turquoise paper to finish all open orders that require the color.) 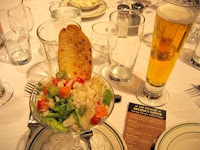 With Luscious Verde moving through the second month of its 2007 social campaign, we decided that we needed a touch of class to balance out our schedule. The event was the Fat Tuesday Brewers’ Dinner at the Chop House. “I’m married to the brewer at Rock Bottom and the Chop House,” says Toni, co-chair of the fictitious LVC Social Committee, “so I have the information on all the beer festivals in the region.” Ten members of the Luscious Verde family attended the dinner this past Tuesday.
The conviviality began at the door, where each attendee was presented with a string of Mardi Gras beads and a tall cold glass of light lager. Following a tantalizing menu preview from Chef Jorge, Head Brewer Scott Guckel introduced the beer lineup.

Sated, but still dressed to kill, we adjourned to the Nauti Mermaid, where Miller Lite was expertly paired with the aromatic mixture of burger grease and urinal cake.

The banquet room at the Chop House is empty now. Chef Jorge has gone back to his seasonal repertoire, and we here at Luscious Verde have returned to the labor of love that is custom stationery. But the memories live on. They live on in our Ibuprofen bottle, emptied in half an hour on Wednesday. In the parking money that Lindsay still owes me. In embarrassing candid photos. The demands of our world did not cease on Tuesday night. Children were born, wedding dates were set, and simchas raged with life. But we paused, as the beers of the world came together for just one night, and we celebrated the love that springs from good food, good company, and a bottomless lager.
Ted
Proofreader @ LVC
Posted by Luscious Verde at 9:29 AM 2 comments: 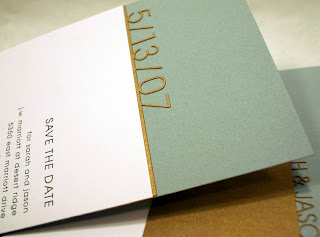 Valentine’s Day was just a few days ago, but we’re still feeling the love – from our retailers, that is (that’s right, we’re not afraid of a little self-promotion). Last week, we shipped an update, to our ever-popular wedding book, that features some very cool new invitation choices. This is more than just new paper colors and simple new designs – we now have the ability to cut nearly anything to customers’ desire. Here’s what a few of our retailers are saying:

“Amazing! How do you do it? It just gets better and better!” – Alison, Petite Paperie

“We love the new wedding pages. They are beautiful. It’s like nothing else we carry, and our customers will love it – absolutely stunning!” – Kate, Papers and Presents

“The new wedding pages are to die for!” – Darci, Say Cheese and Thank You

“I don’t have a hellhound on my trail any longer, and it’s all because of Luscious Verde.” – Blues legend Robert Johnson (OK, we made this one up, but the rest are real) 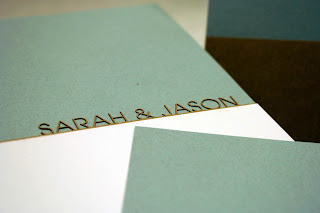 So there you go. Nearly unlimited options added to our already impressive collection of custom designs. We’re pretty happy with our new collection, and we think you will be too.

(P.S. The names referenced on the invitation shown are our own Jason, designer extraordinaire, and his fiancée, Sarah. You can check out their wedding info here.)
Posted by Luscious Verde at 2:58 PM No comments: 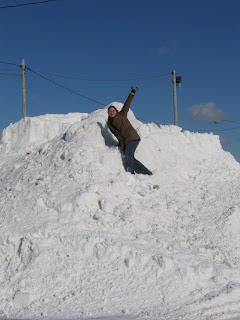 Just in case a few of you couldn't get through to us yesterday or talked to someone other than myself or Toni (who contributed the lovely haiku below from her home in Tremont, on the west side of Cleveland), we were pretty snowed-in. Or snowed-out. In any case, a bunch of us couldn't get to work because of what you see above. Mother Nature hit us, and she hit us hard. Don't worry, though, we're back in action and at full capacity. (We picked our intrepid pricing person Roxi as a model for the above picture because, well, she's the shortest one here.)

(P.S. We swear to god that this will be the last weather-related post for this season. We think.)
Posted by Luscious Verde at 3:16 PM 1 comment: 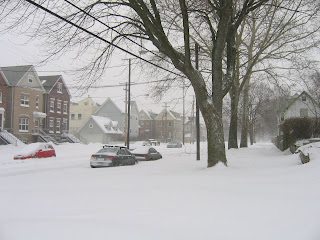 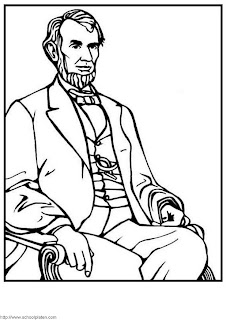 If you’re a Luscious Verde retailer, you should have received an official L.V. holiday card a few months ago. Along with a picture of all the stunningly attractive people who work here, you got a nifty little 2007 coupon book to use at your discretion. After about a month and a half, we’ve received some feedback about the book, both positive and, uh, not-so-positive. We have an idea of what we can and can’t offer in the future, but here are some proposals from the official Luscious Verde drawing board:

- For each order over a certain dollar amount, a designer will drive to your house and cook you dinner (note: you must pay gas money, put the designer up at your house, and buy the food).

- Once a month, we will have our newest proofreader, Ted, create a paper-mache object of your choice to display in a place of honor for your store.

- For all orders placed today, we will hand-sketch a portrait of Abraham Lincoln on the back of each card.

- Valentine’s Day Special: I will personally seal all your envelopes with a kiss – although you’ll probably have to pay us not to do that.

About a month ago, we included a retailer survey with our seasonal newsletter. As a token of how seriously we take these surveys and how much we appreciate feedback, we entered all the surveys into a random drawing for a $250 Luscious Verde gift certificate. We’re pleased to announce that Papers and Presents in Wellesley, Massachusetts, has been selected as our winner. We congratulate them and thank everyone who participated. (Everyone else will receive a copy of the Luscious Verde home game.)

As long as we’re talking about winners, production artist Rachel recently won an internal “Make Your Own Comic Strip” contest. The strip had to focus on the travails of working here, and hers won by popular vote. (It has been edited for content as, frankly, we have way too many in-jokes around here.) Congrats, Rachel. 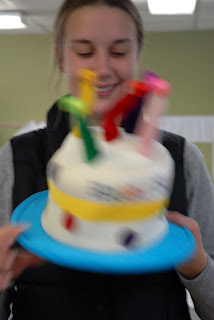 At any business, you usually talk to a multitude of people every day, usually the same people you’ve talked to a million times before. Have you ever wondered about the hopes, dreams and aspirations of those phantom people behind the phone or card? Maybe they’re excellent tuba players, maybe they can eat a whole box of corn dogs in one sitting, or maybe they once built a hovercraft from scratch. (That’s right – some of us have weird hobbies.)

Or maybe you haven’t wondered. Anyhow, we’re introducing a new feature to our blog: the bi-weekly Luscious Verde employee profile. You may talk to us on the phone every day, or you may see our name on the “Made By” tag that comes with each order – but we’d like you to know a little more – whether you care or not.

Takin’ Care of Business – The Story of Liz Oakes

On a common day, operations manager Liz Oakes puts out fires (not literally) and generally makes sure that the behemoth juggernaut that is Luscious Verde keeps on running smoothly. She also drinks a lot of tea and makes sure our lead designer Jason doesn’t play too much vulgar music that can be heard over the phone.

Originally hailing from Chicago, she attended Vanderbilt University in Nashville because she “wanted to go somewhere where I didn’t know anyone,” she says. Her parents were supportive of the move. “Once you make friends, college gets easier. I loved Nashville,” she says.

After graduation, she moved to Cleveland with her boyfriend, who studies biomedical engineering at Case Western Reserve University in Cleveland Heights, Ohio. Sorry fellas!

One fateful day, she saw an ad on Craig’s List for an artistic production worker at Luscious Verde. Bored with her then-job at a rental car company, she decided to apply and was accepted instantly.

“Everything we gave her to do, she did it so fast. It was wonderful,” says Wendy, co-owner of Luscious Verde. “At that time, there was basically no training, but she learned really fast.”

Liz recently celebrated her two-year anniversary at Luscious Verde and was treated to a delectable all-expense-paid lunch at Bravo. She has an amazing memory, loves olives, and she tends to shy away from the human touch. Until recently, she didn’t know the difference between the producer Dr. Dre and the co-host of “Yo! MTV Raps!” – also named Dr. Dre.

(Part of this interview was conducted through assistant operations manager Lindsay Bruner.)

Email ThisBlogThis!Share to TwitterShare to FacebookShare to Pinterest
Labels: On the Job 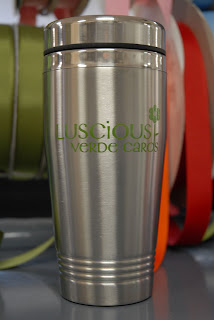 With each package we’ve shipped out in the past six months, either directly to retailers or customers, we’ve included at least one Luscious Verde stainless-steel tall mug. OK, we got a good deal at a mug manufacturer, and we went a little crazy. We have so many of them at our headquarters that we’ve taken to making little forts with the little white boxes in which they come.

We embrace all feedback, whether good or bad, rain or shine. And one of the things we’ve heard about most in the past six months isn’t our painstakingly made cards, our intense typesetting, our kreftik Hebrew skills – it’s the damn mugs. That is, people are getting too many of them. Therefore, what follows is a public service message from Luscious Verde Cards.

WHAT TO DO WITH EXTRA LUSCIOUS VERDE MUGS

10. Drill a hole in the bottom to play a hilarious practical joke on a co-worker.

9. Smuggle alcoholic beverages into a concert or sporting event (Luscious Verde does not assume responsibility for getting kicked out of said event).

6. Use as props in magic and/or juggling act. Make extra cash by performing at children’s birthday parties.

5. Bury in front yard to see if you can grow a mug tree.

4. Give to spouse as 25th anniversary present (silver).

3. Punch a hole in rim to fashion a stunning necklace.

2. Help teach a child about nature by growing a fairly small potato.

1. Give them to friends, family and customers.