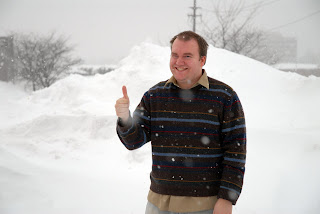 We talk to a lot of people across the country every day. From Long Island to Santa Monica, from Minneapolis to South Beach, we've stamped the Luscious Verde logo a lot of places on this fine land.
A common question we hear on the phone is, "How's the weather there in Cleveland?" Well, this is what it's like: terrible. The east side of Cleveland, where we're located, is one of the weather bullseyes of the country when it comes to winter weather. As evidence, you can usually see the skyline of Cleveland over my left shoulder in this picture. (That's actually my car under that snowdrift -- another hour of shoveling, and I'll be good to go.) 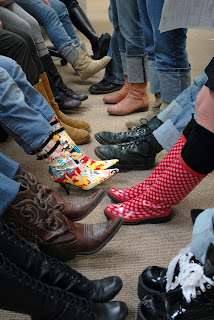 And when the weather gets like this, we get a little stir crazy. Some people knit hoodies during their lunch break, some stare off into space for hours on end (like me), and some think that the cards are talking to them. Some people, like our assistant operations manager Lindsay, force others to take part in theme clothing days. We've had Ugly Holiday Sweater Day and Halloween (of course). This past Friday was Boot Day. Yes, Boot Day. Hey, don't ask me. I just work here.
-- Rob @ L.V.
Posted by Luscious Verde at 3:40 PM 1 comment: Links to this post

The brown skates were rented, the yellow laces tied, and the feeling of ominous foreboding was present for the first Luscious Verde birthday celebration of the year. Friday, January 12 offered an evening of fish and chips and Monte Cristo sandwiches at our favorite Irish eatery before heading to a local skating rink, where we would be schooled all evening by people under five feet tall. 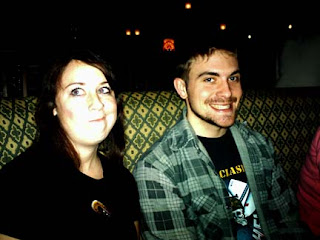 The evening began with us launching our inner-teen-super-sensation-roller-skating-championship personalities onto the slick rink. After going in circles and shouting at quality assurance manager Genevieve to let go of the wall (for the ninth time), we were about to call it a night. At that point, a teenage girl threw off her rollerblades and charged toward us. While afraid that I may have started an eminent rumble, I braced myself for the teen slap-down – alas, the girl was actually charging at another group of tweens. Skates were off, and hair was being pulled. 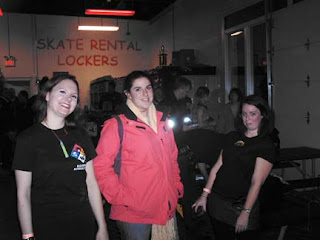 The Luscious Verde squad stayed far away, of course, merely giggling under our breath when all was broken up by the kindly local police department. Ted (proofreader), Lisa (print production artist) and I (production artist) hit the rink for a few last rounds when we noticed our comrades Lindsay (assistant operations manager) and Toni (client relations manager) filling out what appeared to be employment applications, but what were actually police reports. What a nice memento from the evening. Where was our red-headed Genevieve through all this? Still clinging to the wall. 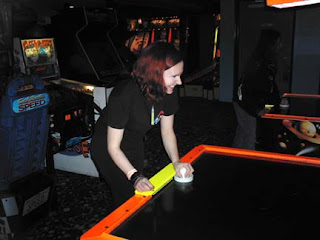 Posted by Luscious Verde at 1:50 PM No comments: Links to this post

A few months ago, we dipped our toes into the world of marketing and public relations. We wrote a snazzy press release for our new baby catalog, designed it real pretty, and sent it out to many discerning arbiters of culture. But we’re also kind of lazy. So we got to thinking one day: What would it be like if someone else wrote a press release for us?

So what follows is a “Mad Libs”-style paragraph taken directly from our press release. Fill it up with the most creative, ridiculous or somewhat offensive words you can think of. (Be honest – those last ones are often the funniest.) Leave it as a blog comment – we’ll pick the best one and give that person a prize. And don’t worry – it probably won’t be a Luscious Verde mug.

In a world of (adjective) white and cream, Luscious Verde pops with an imagination and (noun) that’s, well, luscious. Unlike the (adjective) and (adjective) bows of yesteryear, today’s (plural noun) expect something (adjective) from their birth announcements. Bursting with color and style, our (plural noun) are unlike any other from (place) or, indeed, (another place). Made completely from (noun), we create something (adverb) different – and chic – for each valued (noun). 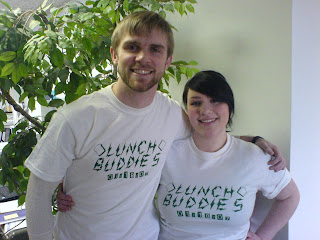 Those of us who work here at Luscious Verde know a good thing when we see it. If it's free, even better. And if it's free food, forget about it -- we're on it quicker than you can say "Luscious" three times fast.

Every week, Luscious Verde owners Chris and Wendy (a.k.a. C-Dub, the Dynamic Duo, or Oh Man, What Did I Do Wrong Now?) invite two employees out to a free lunch at the place of the employees' choosing. It's a working lunch, which means that the drinking and gossip so rampant during normal extracurricular L.V.C. outings is kept to a minimum. It's a good way to keep a dialogue going between the owners and employees, and a lot of great ideas have spawned from the lunches, like...uh...you know...uh...trust us! Great ideas!

Last week, two dedicated L.V.C. employees went all-out in a manner never before seen in an employee lunch, maybe in the history of the world, ever. Just look at that picture up there: Ted, an intrepid proofreader, and Rachel, an industrious production artist, actually had T-shirts made to commemorate the experience.

"We had been plotting in secret to do something special for the lunch," said Rachel. "We thought it would be pretty cool. My boyfriend's a screen printer, so we got the shirts easily. Ted's, like, the greatest kid ever. We're thinking of adopting him."

"I would describe my reaction to the shirts as a joyousness that almost brought a tear to my eye," said Ted, still obviously in awe of the shirt. "It was as surprising as it was fashionable."

Wow. Can't you feel that co-worker camaraderie? I...I think I have something in my eye.

After many, many months in the making (OK, days), we are proud to unveil the Luscious Verde blog. While it is currently a modest little venture, we have some grand ideas for this space in the near future -- so you'll have to stay tuned. Please feel free to contact us here or at info@lusciousverde.com. Thanks!
Posted by Luscious Verde at 4:13 PM No comments: Links to this post